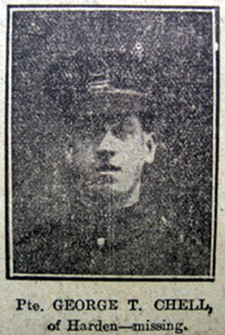 The family originated in Staffordshire. He joined the Prince of Wales’s Own (West Yorkshire) Regiment in 1916 and was discharged in 1919 as a Lance Corporal.

Apart from his medal record, his military records have not survived.

He married Ivy Gladys Darnborough in January 1917 and they had a daughter Gladys also born in May-June 1917, and a daughter Sarah (1920).

George died in 1957 and his wife in 1976. Ivy became known as Gladys probably to differentiate her from her sister-in-law, also Ivy, who married John Chell.