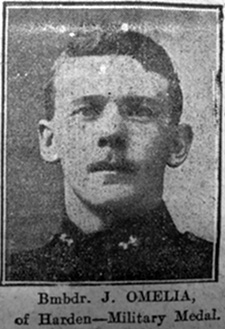 John O’Melia MM joined the Royal Field Artillery and was awarded the Military Medal in July 1917. His rank was Bombadier.

There is no O’Melia family recorded in Harden until the Electoral Register of 1919 but the most likely candidates are the family from the 1901 census at 27 Frederick Street Bradford when John was 10 and the oldest of five children. His mother, Mary, died in 1904 and his father, Hubert, remarried in 1909.

John died in 1936 but his widow continued to live in Harden.

During the Second World war she moved to Valley View and died in 1970.