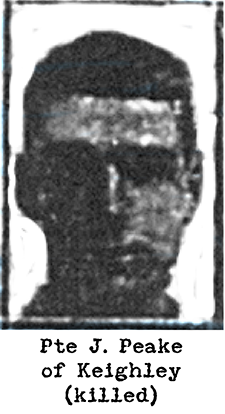 He lived with his father Charles, mother Harriet Matilda, sisters Ellen (23) and Annie (21) and brother William (26).

John enlisted into the army in Halifax, and became Private J Peake, 51930, of the East Yorkshire Regiment (1st Battalion). He was killed in action on 24th October 1918 in France.

St. Souplet village was captured by the American 30th Division on the 10th October 1918. The American troops made a cemetery of 371 American and seven British graves on the South-West side of the village, A smaller British cemetery was made alongside.  The American graves were removed after the Armistice and the seven British graves were moved into the British cemetery. Further British graves were brought in from the surrounding battlefields and smaller burial grounds. There are now nearly 750, 1914-18 war casualties commemorated in this site. Of these, one-fifth are unidentified and special memorials are erected to 55 soldiers from the United Kingdom, buried in other cemeteries, whose graves could not be found. 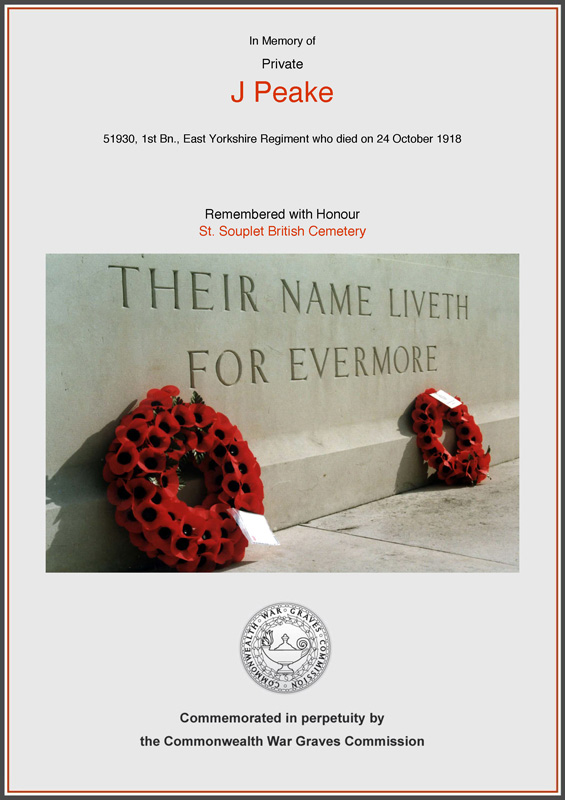 John Peake’s photograph appears in the Keighley News from 25th January 1919, under ‘Local Heroes of the War’ and is listed in the ‘Keighley Roll of Honour’.