The Harden War Memorial was unveiled on 9 October 1920 by Brigadier-General Sir George Armytage Bart. C.B., and dedicated by Revd. R Garrad, vicar of Bingley. The names of those who fell during the Second World War were added later.

The war memorial takes the form of a wayside cross and is located to the east of St Saviour’s Church on a prominent corner site of raised ground at the junction of Harden Road, Wilsden Road and Keighley Road. The memorial is set upon a stone-flagged platform accessed by a central flight of three steps and flanked by sandstone ashlar gate piers with flat-topped pyramidal caps, and high ramped walls of coursed millstone grit blocks with segmental copings. A low, stepped millstone-grit retaining wall forms the backdrop to the memorial and platform.

The memorial consists of a shaped hexagonal base surmounted by a Tuscan column and a cross. The base is inscribed with ‘REMEMBER’ to the front face with ‘1914’ to the left and ‘1919’ to the right. The rear three faces are inscribed ‘1939 – 1945’. The memorial is set upon a 2-stepped hexagonal plinth; the top step of which bears the names of the Fallen. The 21 names of those killed during the First World War are arranged in alphabetical order on the three front faces, whilst the 13 names of those killed during the Second World War are located on the three rear faces of the plinth.

The Village Council applied to Historic England and after examining records and other relevant information and having considered the architectural and historic interest, Harden War Memorial was listed at Grade II. A report from Historic England can be viewed here. 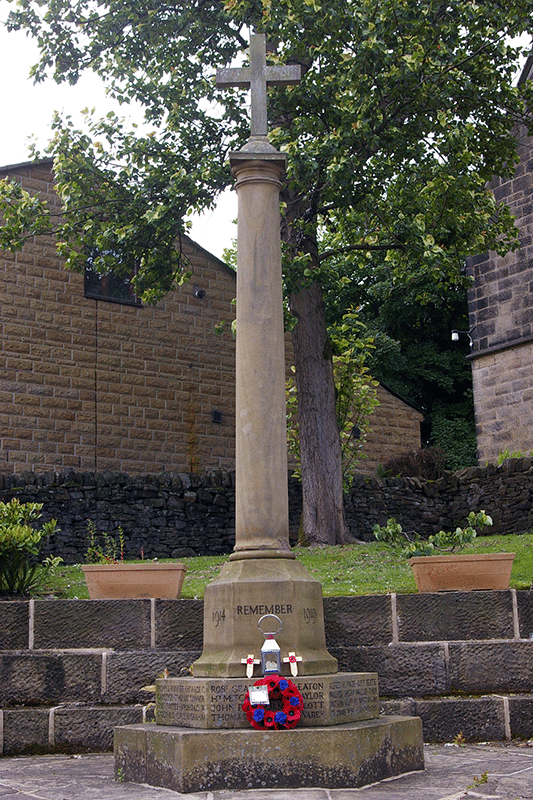 View details of the memorial at War Memorials Online.