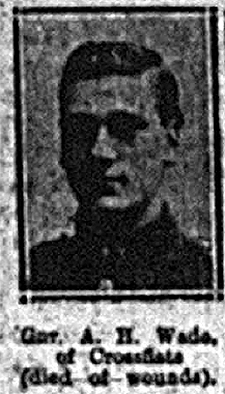 14 year old Alfred Hill Wade is listed in the 1911 Census as living at 3 Croft Street, Harden, with his father Luther, mother Jane, sister Elsie (aged 16) and brothers Clifford (aged 9), Willie (aged 4) and one month old Denis. He was born in Bingley and in 1911 his occupation was spring works labourer, at the Harden spring manufacturers.

By the beginning of the war the family had moved to Crossflatts, and Alfred was working for a milk dealer in Crossflatts. He enlisted into the army in January 1915 and he was sent to France the following year. Gunner Alfred Hill Wade, 795801, of the Royal Field Artillery, was injured in 1918 in France and died of his wounds on 27th May 1918, aged 22.

Etaples Military Cemetery is the largest CWGC cemetery in France. It is located near Boulogne on the former site of a large military hospital complex used by the Allies during the First World War.

During the First World War, the area around Etaples was the scene of immense concentrations of Commonwealth reinforcement camps and hospitals. It was remote from attack, except from aircraft, and accessible by railway from both the northern or the southern battlefields.

In 1917, 100,000 troops were camped among the sand dunes and the hospitals, which included eleven general, one stationary, four Red Cross hospitals and a convalescent depot, that could deal with 22,000 wounded or sick.

In September 1919, ten months after the Armistice, three hospitals and the Q.M.A.A.C. convalescent depot remained.

The cemetery contains 10,771 Commonwealth burials of the First World War, the earliest dating from May 1915. 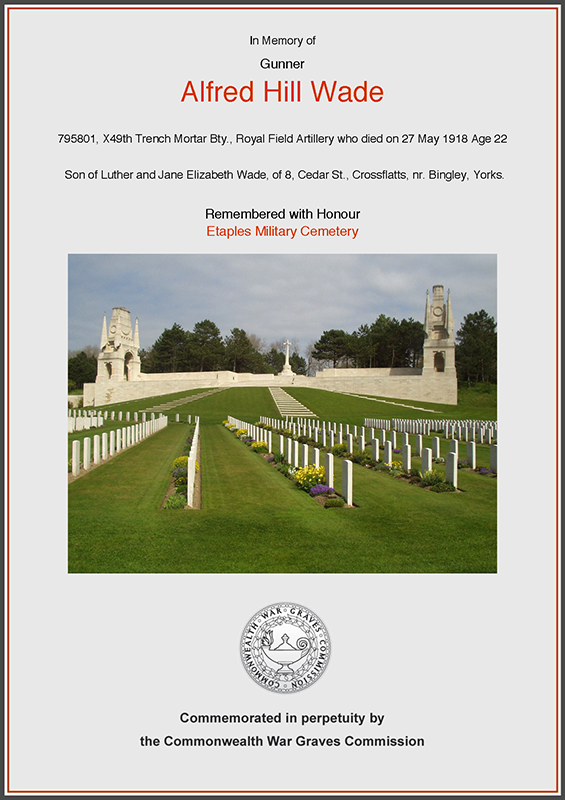 Alfred Wade’s photograph appears on page 3 of the Keighley News from 15th June 1918, under ‘Local Heroes of the War’.  Report on same page under ‘Local War Casualties – Bingley and District’.