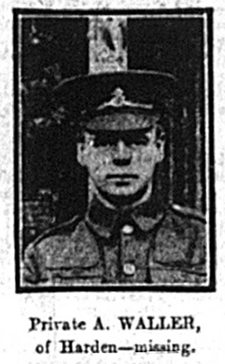 Private Arthur Waller, 13943, signed up to the Duke of Wellington’s (West Riding Regiment), 2nd Battalion. He was reported as ‘missing’ in the Keighley News on 4th November 1916, but had sadly been killed in action on 12th October 1916.

On 1 July 1916, supported by a French attack to the south, thirteen divisions of Commonwealth forces launched an offensive on a line from north of Gommecourt to Maricourt. Despite a preliminary bombardment lasting seven days, the German defences were barely touched and the attack met unexpectedly fierce resistance. Losses were catastrophic and with only minimal advances on the southern flank, the initial attack was a failure.

In the following weeks, huge resources of manpower and equipment were deployed in an attempt to exploit the modest successes of the first day. However, the German Army resisted tenaciously and at the end of September, Thiepval was finally captured.

The Battle of the Somme finally ended on 18 November with the onset of winter. In the spring of 1917, the German forces fell back to their newly prepared defences, the Hindenburg Line, and there were no further significant engagements in the Somme sector until the Germans mounted their major offensive in March 1918.

The Thiepval Memorial, the Memorial to the Missing of the Somme, bears the names of more than 72,000 officers and men who died in the Somme sector before 20 March 1918 and have no known grave. 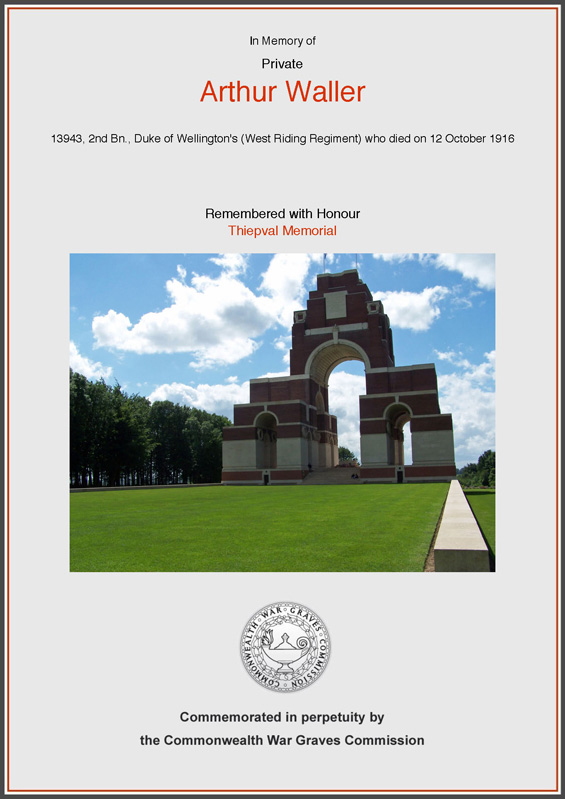 Arthur Waller’s photograph appears on page 3 of the Keighley News from 4th November 1916, under ‘Local Heroes of the War’.  Report is on page 5 under ‘Local War Casualties – Harden’.