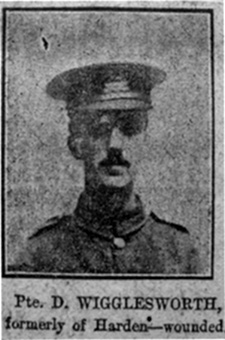 Dickenson (or Dickinson) Wigglesworth was born in 1893. The Wigglesworth family lived at 1 Hardhill Houses, Harden in 1901. By the time of the 1911 census they had moved on and Dickenson and his sister Annie were living in Harrogate.

In 1911, he married Edith Chapman. She died in 1916 giving birth to their son John. The baby tragically died shortly afterwards.

Dickinson joined the Prince of Wales’s Own (West Yorkshire) Regiment, Northumberland Fusiliers and although he was reported wounded he apparently survived and married Eliza Broughton in 1923.

Dickinson was awarded the General Service Medal for serving in Iraq in 1817. Following a disastrous defeat in 1916 when 10,000 men were taken prisoner, the British took the middle eastern campaign more seriously and in 1917 the British occupied Baghdad.