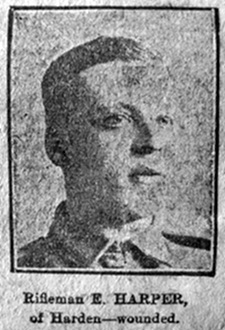 The only E Harper on the 1911 census in Harden is Enos Harper who was 32 and a police constable. A more likely candidate is Edward Harper who was in Keighley in 1911 aged 21 and is on the 1918 Electoral Register at 9 Lane End, Harden.

His war records have not survived. In 1918, he married Eliza Kenyon and moved to 16 Spring Row Harden.

Not all women had the vote in 1919 and they don’t appear on the register together until 1929, by which time they were living in Bingley, she had passed her 30th birthday and was then entitled to vote.