Harry Brown was born in 1895. In 1911 he lived at 8 Spring Row, Harden with his parent Ernest and Hannah and his sister Maud.

When he joined the 8th Battalion of the West Riding Regiment in 1912 he gave his occupation as Warehouse Overlooker and his address as 17 Lane End, Harden. His parents had moved to Rothsay Terrace in Great Horton and this explains why Harry, who died of wounds sustained in France and Flanders in 1917, is commemorated on the Great Horton War Memorial and not in Harden.

Aside from the wounds which killed him, Harry experiences in the trenches indicate that they were not at all safe places to be. He scalded his foot while making tea, when someone accidentally knocked the kettle over with a rifle. He also cut his eyebrow on barbed wire and got a septic foot wound while on active duty in the trenches. On each occasion his commanding officer noted that the injuries were of a ‘trivial’ or ‘slight’ nature and that Harry was not to blame.

Locre (now Loker) was in Allied hands during the greater part of the war, and field ambulances were stationed in the Convent of St. Antoine. The village changed hands several times between 25 and 30 April 1918, when it was recaptured by the French.

The hospice, or convent, was the scene of severe fighting on 20 May, but was not retaken until first week in July. The Hospice Cemetery was begun in June 1917 by field ambulances and fighting units, and was used until April 1918. 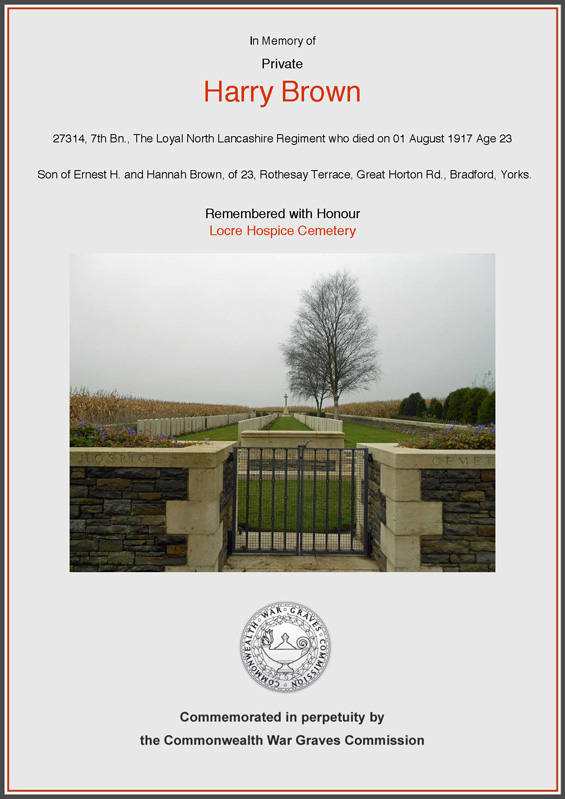