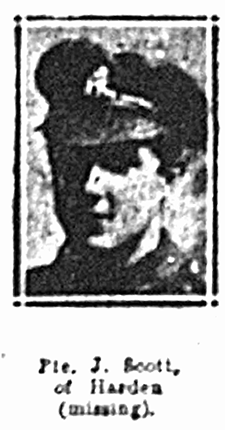 James Scott was born in Bingley in 1897, the youngest child of James and Mary Ann of 58 Long Lane, Harden. The 1911 Census lists his two brothers, Thomas (aged 26, who also died in the war and whose name is on the war memorial), John (aged 19), and sisters Elizabeth (aged 21) and Lily Ann (aged 16). James was 14 in 1911, and his occupation is listed as ‘daffer’or ‘doffer’, working with the spinning machines in the local worsted mill in Harden.

James joined the army in December 1915, becoming Private James Scott. 18677, of the 10th Battalion of the Duke of Wellington’s (West Riding Regiment). He served eighteen months in France before being transferred to Italy in November 1917. He was injured twice while in France.

James is commemorated at Giavera Memorial, Italy which commemorates 150 soldiers of the Commonwealth who died in Italy between 1917 and 1918, and whose places of burial is not known.

The Italians entered the war on the Allied side, declaring war on Austria, in May 1915. Commonwealth forces were at the Italian front between November 1917 and November 1918.  The Montello sector acted as a hinge to the whole Italian line, joining that portion facing north from Mount Tomba to Lake Garda with the defensive line of the River Piave covering Venice, which was held by the Third Italian Army.  In January 1918, an additional sector of the defence on the right was taken over by the Commonwealth troops. Between December and March the Royal Flying Corps carried out a large number of successful raids on enemy aerodromes, railway junctions, and other objectives.  On 4 November the Armistice came into effect, and active hostilities ceased. Men who died in defending the Piave from December 1917, to March, 1918, and those who fell on the west of the river during the Passage of the Piave, are buried in this cemetery. Giavera British Cemetery contains 417 Commonwealth burials of the First World War. 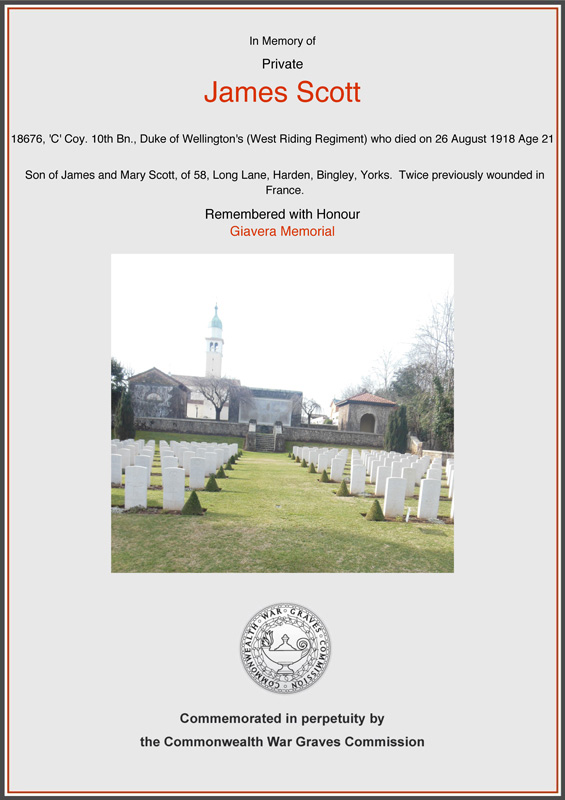