There were five campaign medals available for individuals who saw service in the First World War the main three being the 1914 – 15 Star, the British War Medal and the Allied victory Medal.

An individual, male or female, could be issued with a maximum of three of these medals, although there are a small number of exceptions to the rule.

Medals were impressed with the name of the recipient and usually included some or all of the following: service number, rank, first name or initial, surname and military unit (Regiment or Corps). This was either on the rim of the medal or in the case of a star, on the reverse.

A badge was also available to officers and men who had been honourably discharged or had retired as a result of sickness or wounds from war service. 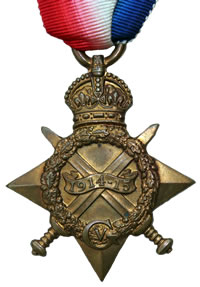 This bronze medal was authorised in 1918. It is very similar to the 1914 Star but it was issued to a much wider range of recipients.

Broadly speaking it was awarded to all who served in any theatre of war against Germany between 5th August 1914 and 31st December 1915, except those eligible for the 1914 Star.

Like the 1914 Star, the 1914-15 Star was not awarded alone. The recipient had to have received the British War Medal and the Victory Medal. The reverse is plain with the recipient’s service number, rank, name and unit impressed on it.

An estimated 2.4 million of these medals were issued.

The silver or bronze medal was awarded to officers and men of the British and Imperial Forces who either entered a theatre of war or entered service overseas between 5th August 1914 and 11th November 1918 inclusive. This was later extended to services in Russia, Siberia and some other areas in 1919 and 1920.

The front of the medal depicts the head of George V. The recipient’s service number, rank, name and unit was impressed on the rim.

It was decided that each of the allies should each issue their own bronze victory medal with a similar design, similar equivalent wording and identical ribbon. The front depicts a winged classical figure representing victory.

The recipient’s service number, rank, name and unit was impressed on the rim. 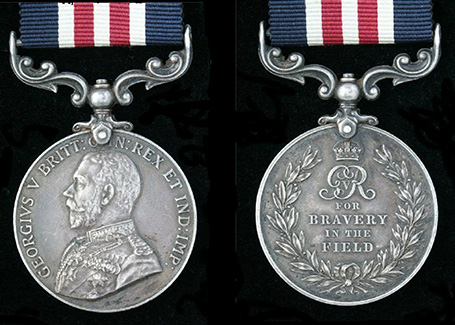 The Military Medal was awarded to Richard Bunker, Harry Smith and John O’Melia. It was awarded to personnel of the British Army below commissioned rank, for bravery in battle on land. Over 115,000 awards were made for actions during the First World War. 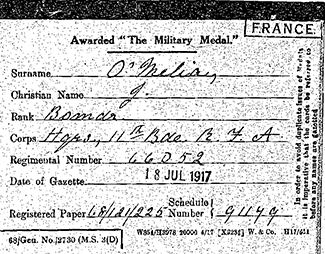 Pip, Squeak and Wilfred are the affectionate names given to the three WW1 campaign medals — the 1914 Star or 1914-15 Star, British War Medal and Victory Medal respectively.

The set of three medals or at least the British War Medal and the Victory Medal are the most likely medals to be found among family heirlooms.

When the medals were issued in the 1920’s it coincided with a popular comic strip published by the Daily Mirror newspaper. Pip was the dog, Squeak the penguin and Wilfred the young rabbit.

For some reason the three names of the characters became associated with the three campaign medals being issued at that time to many thousands of returning servicemen, and they stuck.

Back to War History Page 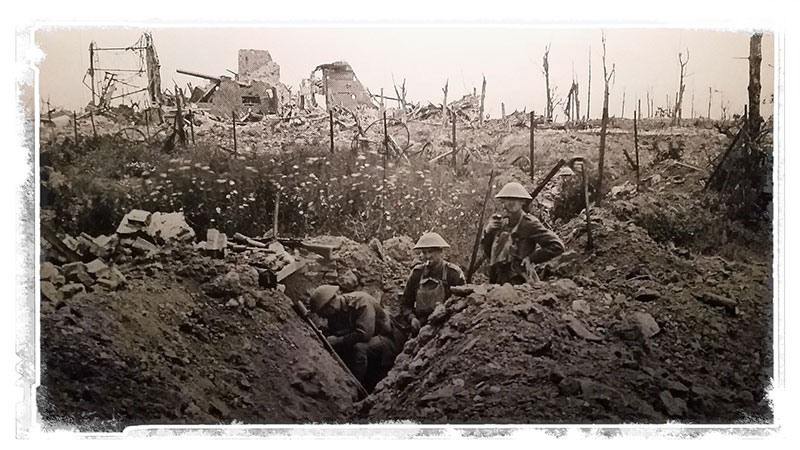