Thomas Scott was the older brother of James Scott, also listed on the war memorial. Born in Bingley in 1885, he lived with his family at 58 Long Lane, Harden, the eldest child of James and Mary. According to the 1911 Census, 26 year old Thomas worked as a spring maker in the spring factory in Harden.

Thomas enlisted in Halifax in December 1915 and was mobilised the following year. Private Thomas Scott, 63392 of the Durham Light Infantry spent over a year in service in France but returned in May 1917, and in December that year was admitted to 1st Western General Hospital in Liverpool diagnosed with chronic nephritis (inflamed kidneys). Thomas’ army records state that his condition was due to cold exposure on active service overseas in Ypres, France, and he was discharged on 9th January 1918.

Thomas never recovered from this condition and he died on 8th June 1918, aged 33. He is buried in Bingley Cemetery.

This is between the Keighley road and the River Aire. It was opened in 1870, and it belongs to the “Burial Board for the Parishes of Bingley and Holy Trinity, Bingley.” 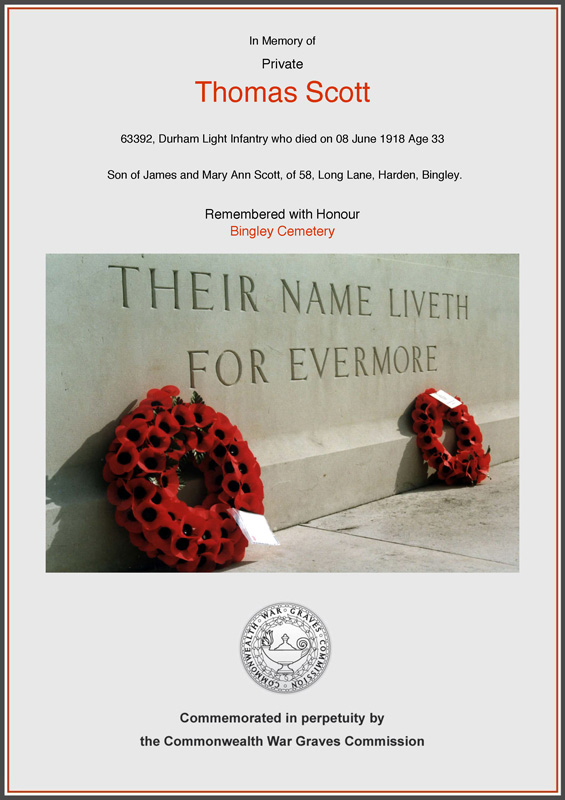 Report of Thomas Scott’s death appears on page 8 of the Keighley News from 15th June 1918, under ‘Births, Deaths and Marriages’.