There is very little information to be found on Thomas Varey – he is not listed as living in Harden in the 1911 Census, and he does not appear in either the Keighley Roll of Honour or the Keighley News. However, according to his war records, Thomas Varey resided in Harden, Bingley, and the Commonwealth War Graves Commission notes that he was the son of Mr and Mrs John Varey of Bradford.

Thomas enlisted in Bingley and became Private Thomas Varey, 11025, in the 2nd Battalion of the Duke of Wellington’s (West Riding Regiment).

Thomas died of wounds on 7th May 1915, aged 38, and he is commemorated at Boulogne Eastern Cemetery, Pas de Calais, France

Boulogne, was one of the three base ports most extensively used by the Commonwealth armies on the Western Front throughout the First World War. It was closed and cleared on the 27 August 1914 when the Allies were forced to fall back ahead of the German advance, but was opened again in October and from that month to the end of the war, Boulogne and Wimereux formed one of the chief hospital areas.  Until June 1918, the dead from the hospitals at Boulogne itself were buried in the Cimetiere de L’Est, one of the town cemeteries,. In the spring of 1918, it was found that space was running short in the Eastern Cemetery in spite of repeated extensions to the south, and the site of the new cemetery at Terlincthun was chosen.. Boulogne Eastern Cemetery contains 5,577 Commonwealth burials of the First World War . 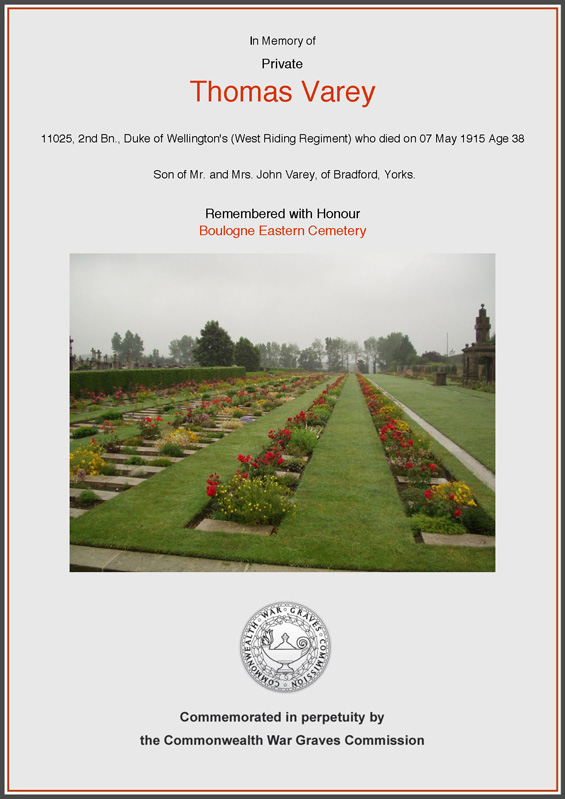