2nd/7th Battalion of the Duke of Wellington's (West Riding Regiment)

The only Thomas Watson on the 1911 Census for Harden was 9 years old, having been born in 1902. His address is given as The Square, Harden, where he resided with his mother and father, Mary Ann and Mark, brother Christopher (aged 15) and sisters Adelaide (aged 13) and Katherine (aged 4).

War records show that a Private Thomas Watson, 11689, of the 2nd/7th Battalion, of the Duke of Wellington’s (West Riding Regiment) died on 28th November 1917. If this is the same Tom Watson, then he would only have been 15 or 16 years old and, therefore, not old enough to even enlist in the army. However, evidence suggests that many boys too young to enlist did indeed do so and ended up dying as a consequence. Tom is commemorated at Cambrai Memorial, Louverval, France.

The Cambrai Memorial commemorates more than 7,000 servicemen of the United Kingdom and South Africa who died in the Battle of Cambrai in November and December 1917 and whose graves are not known.  Sir Douglas Haig described the object of the Cambrai operations as the gaining of a ‘local success by a sudden attack at a point where the enemy did not expect it’ and to some extent they succeeded. The proposed method of assault was new, with no preliminary artillery bombardment. Instead, tanks would be used to break through the German wire, with the infantry following under the cover of smoke barrages.  For the Allies, the results of the battle were ultimately disappointing but valuable lessons were learnt about new strategies and tactical approaches to fighting. The Germans had also discovered that their fixed lines of defence, no matter how well prepared, were vulnerable. 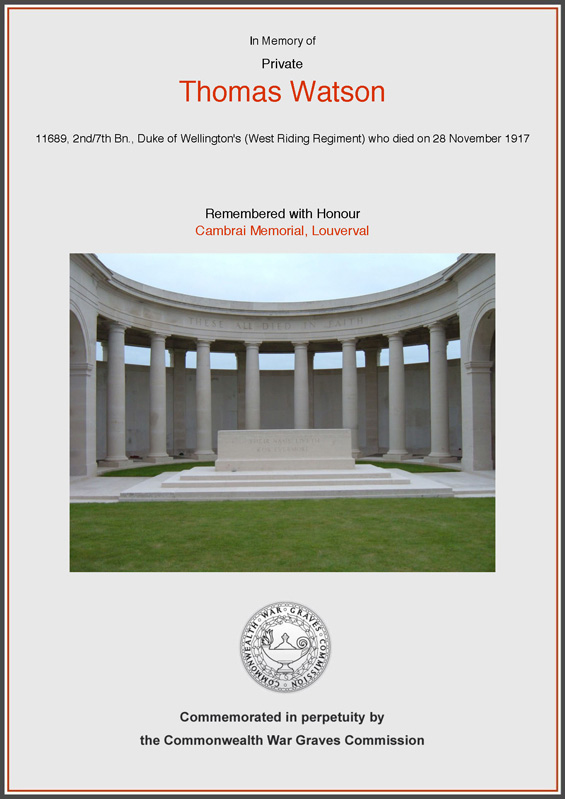