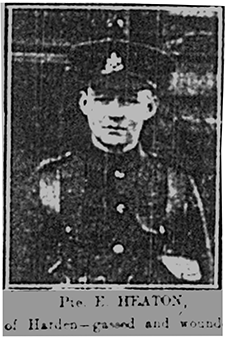 Born in Harden in 1897, Ellis Heaton is listed in the 1911 Census as being 14 years of age and living at Anthony House, Anthony Lane, Harden. Ellis lived with his father Samuel, mother Mary Jane, brothers Joseph (aged 17), Thomas (aged 12) and Arthur (aged 8), and his sister Annie (aged 12), and his occupation in 1911 was as a ‘bobbin coker officer’ at a worsted mill.

Ellis enlisted in Sheffield in September 1915 and was sent to the front in March 1916.

The Keighley News of 25th August 1917 states that his father had received information that ‘his son, Ellis Heaton, has been gassed and wounded, and is now in hospital in Boulogne’.

Ellis was killed in action on 27th August 1918, and is listed by the Commonwealth War Graves Commission as Corporal E Heaton, 11927, of the 38th Battalion, Machine Gun Corps (Infantry).

Caterpillar Valley was the name given by the army to the long valley which rises eastwards, past “Caterpillar Wood”, to the high ground at Guillemont.

The ground was captured, after very fierce fighting, in the latter part of July 1916. It was lost in the German advance of March 1918 and recovered by the 38th (Welsh) Division on 28 August 1918.

After the Armistice, this cemetery was hugely increased when the graves of more than 5,500 officers and men were brought in from other small cemeteries, and the battlefields of the Somme.

The great majority of these soldiers died in the autumn of 1916 and almost all the rest in August or September 1918. Caterpillar Valley now contains 5,569 Commonwealth burials and commemorations of the First World War. 3,796 of the burials are unidentified. 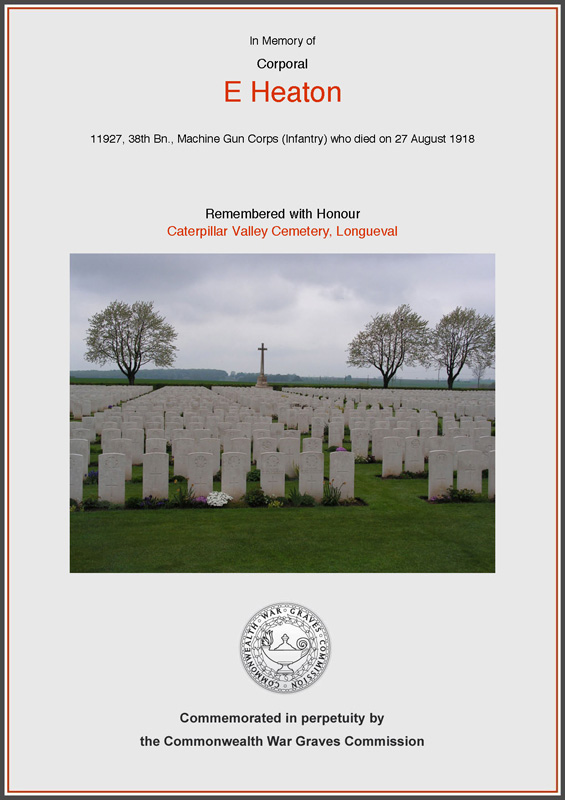 Report of being gassed and wounded on page 3 of Keighley News 25th August 1917 under ‘Local War Casualties – Harden’.

Ellis Heaton’s photograph appears on page 3 of Keighley News 21st September 1918 under ‘Local Heroes of the War’.  Report of being killed in action on same page under ‘Local War Casualties – Bingley and District’.