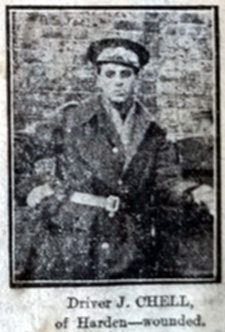 The Chell family lived at 2-4 Bents Foot in 1911. John Chell was an assistant butcher aged 19.

The family originated in Staffordshire but by the time he enlisted in 1916 he was married to Ivy nee Crook (Oct 1915) with a son, George (Jan 1916), living in Amy Street in Bingley.

His war records have survived remarkably intact so we know that he was 5’ 7” tall with a chest measurement of 37”.

He was enlisted for General Service in the Army Service Corps to be trained as a driver paid at a rate of 1 shilling and 2 pence per day.

He was wounded and gassed in France in August 1917 and sent home but in early 1918 he embarked from Southampton possibly for Le Havre.

In December 1918 he was in Italy (Genoa?) and was diagnosed with influenza. He was invalided back to England in January 1919.

His reference on discharge in 1919 states that his character was, “very good. He is a good motor lorry driver, willing, honest, sober and trustworthy.”

He continued to live in Amy Street but claimed an occupational right to vote from 56 Bingley Road, Saltaire – currently Kentucky Fried Chicken.

There is a record of Chell’s Butchers on this site as late as 1946.

In 1926 he moved to 2 Victoria Avenue, Saltaire, a smart end of terrace property which still exists today and his wife, Ivy appears on the register, having reached the age of 30 by then and entitled to vote.

John Chell became a well-known figure in Shipley and a leading light in the Legion of Frontiersmen, a patriotic organisation formed in Britain in 1905 and designed to bolster the defensive capacity of the British Empire.