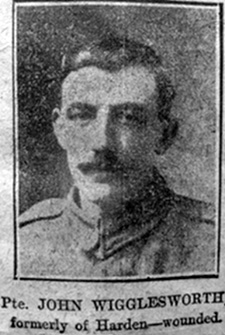 John Wigglesworth was born in 1890. The Wigglesworth family lived at 1 Hardhill Houses, Harden in 1901 but by the time of the 1911 census they had moved on and two of the children were living in Harrogate.

He joined the Canadian Overseas Expeditionary Force in July 1915 and apparently survived the war as the family appear in the 1921 census in Hastings, West Ontario.

His wife committed suicide by drowning in 1924 which might explain why the two children went to England on the SS Regina on the same year. The date of his death is not known.